Hi folks,
I was wondering if there are any plans for releasing a stable coin for Colombian Peso (cCOP)?

We should do it. We’re waiting on the technical process to be made easier so we can quickly launch more cStables.

As Pinotio said, were working on a way to make it easier to ship stabletokens. Do you have a particular use-case you are exited about for a potential cCOP?

Colombia is in the top 10 in Cryptoassets transactions.

How many crypto owners in Colombia?
It is estimated that over 3.1 million people, 6.1% of Colombia’s total population, currently own cryptocurrency.

Colombia saw a major boost in crypto use as a store of wealth as well as for transactional purposes in 2020, with peer-to-peer lending platforms and exchanges recording historic growth. LocalBitcoins reported that Colombia accounted for 11.3% of its global volume in 2020, making it one of the firm’s “main markets” alongside Russia and Venezuela. Transaction volumes on Buda.com, one of Latin America’s largest crypto exchanges, grew by 350% between 2019 and 2020 in Colombia, with active users on the platform increasing by 125% to 16,092 according to data provided by the exchange.

Colombia also boasts the highest number of bitcoin ATMs in a Latin American country, according to Coin ATM Radar. The country has 59 bitcoin ATMs and tellers, with 33 in Bogota, the capital, alone. In contrast, Panama has only 17 bitcoin ATMs, the second-largest number in the region.

Other way Colombia is mostly agricultural and small farmers, I am Agricultural Engineer and also works with the Goverment and works also in a trading and Investment company and i am the leader of Cryptocurrency investigation.

We and want to promote Agriwards from the celo Blockchain and works also with Valora and Pact, but to lead to the Cryptoadoption is necessary to disrupt in the mind of the people they don-t want to have in their mind the exchange rate of USD/COP they want to do their savings in their native currency.

Q: What is Agriwards? A: Agriwards is a platform powered by blockchain that connects you with the smallholder farmers that grow your food. It also enables you to directly support social impact projects that uplift farmer communities.

cCOP must be one of the priorities. If you can add this Stablecoin to the Celo ecosystem, i will help a lot with the criptoadoption in Colombia.

People dont wanna have in their mind the exchange rate USD/COP they want to think in their local currency is a mental barrier.

Hi @juancamp1987 I’ve been creating ecosystem for the Celo community in Colombia and 100% agree with you, a cCOP it very interesting since people still believe in the local currency and also as a Colombians we don’t think in dollars, I’m living between Medellín and Bogotá and we already have somethings going on I’ll like to chat with you in case you want to be supporting the Celo ecosystem closely. ([email protected]) since we as community are facing some challenges within the regulatory aspects

cCOP could be important for the reasons you mentioned and I’d like to add is that there is an opportunity in the market of loans, having a cCOP could help to close a financial inclusion gap that has a market of +700K USD per day for people asking for loans outside of the formal market (this is part of Celo’s mission )

People and merchants accepting cUSD and COP with Valora app , Cobru (app in Colombia where you can exchange cUSD to COP) e.g. could easily demonstrated to people that are credit worthy just showing their addresses and not bank accounts, or also provide a easily way to join the DeFi ecosystem,

Let’s have a chat

Sure thanks for reply @davidmriascos
I’m located in Medellin if you want to talk we can meet when you want.
I also can help with the regulations aspects.
And btw the ilegal loans called “gota a gota” and the very high rates are a great opportunity to help people to be more inclusive in financial markets.

I will email you to make an appointment we can do greater things for Celo ecosystem but really need the cCOP.

Hello @juancamp1987 I am working on a prototype for a solution on the subject of remittances and part of the core is that it is supported by a stablecoin. Consequently, it would be very important for the acceptance and testing of my minimum viable product.

Hey all! Here Sebastián founder of Simpol we already have a use for the cCOP.

Right now we have over 6k users in Colombia using stable coins (cUSD and UST) in our wallet, and one of our biggest challenges in the country is the possibility to give any way to spend their assets, as @juancamp1987 mentioned before in the country there is a mental barrier and people are usually to think/spend in COP.

If you want other real cases to think about the adoption of this proposal, in Colombia we have Daily Cop (DLY) a project launched as the “first stable coin peg to COP” 2 years ago that is failing for stability mechanism, not for adoption (+113k active wallets: Daily COP (DLYCOP) Token Tracker | PolygonScan).

Hi everyone, I’m Carlos Andrés González, CEO an founder of Indahouse. We are developing the first app to buy and sell real state fractionated in Colombia.

We are ready to start operations in the around 3 months, and hope we can see the CCop to do transactions with a COP stablecoin.

The last year, the real state market cap was around 11B dolars in Colombia and 39T in LATAM, so, if you launch the CCop, we can put a big quote of transactions with that one.

Thank you for your great work!

Hi @Andres thanks for reply, @davidmriascos had told me about the project.
Nice if we can meet by a VideoCall or in person if you prefer, firstly I am going to send you a DM to exchange contacts.

Nice to have you here in this Topic, we can reach the goal to have a cCOP togheter

@Pinotio.com Just to maintain the conversation about the cCOP there are some news about posible use cases for the cCOP:

@nvillegase have a great tokenization project in Colombia about green energies. His team are doing a great work with his development called Unergy, this is another use case for the cCOP. They are running atm in the polygon Layer2 but they know about Celo in the BlochchainSummitLatam and they are thinking about moving to the Celo Network.

In Medellin exist a place called HashHouse and they receive USDT, USDC and BUSD. I have asked them to receive the cUSD and they are open mind to do that, also if we have the cCOP they can accept it as a payment method.

In the next days Medellin is going to have a blockchain event called XpoCrypto I was talking with the organizers maybe to have a panel about StableCoins and could be an opportunity to introduce a StableCoin pegged to the ColombianPeso and backed by the Celo Reserve a Carbon Negative reserve. That sounds very good for the people.

Thanks to @Pinotio.com and @davidmriascos for his support since I have introduced the proposal for a new stablecoin pegged to the Colombian Peso.

I think we have a lot of advance at the moment.

I encourage to anyone that has something to include in the conversation please put your thoughts here.

Thanks all of you for help.

> This was created on behalf of Juan (Discord: juancamp1987#4903) @Juancamp1987.… Any feedback should be directed towards him. - Add draft Celo Governance Proposal 60 - Discussion is taking place on the [Celo Forum](https://forum.celo.org/t/proposal-to-introduce-colombian-peso-ccop-stable-coin/3200/15) regarding this proposal

Hi Juan! I guess you were born in 1987? Me too! Congratulations for your proposal. Stablecoins could be a very smart and subtle way to introduce people into the crypto space and most importantly to educate them about finance .

Since Colombia is a country with a big informal retail (comercio informal) due to the large majority of Colombians are unbanked, I would love to see more collaboration of other projects/Dapps that provide the infrastructure for real use cases of this stable coin and many other tokens for payments, loans, defi, DAOS, etc.

In Colombia there are many hard-working communities like farmers, street vendors, etc. who would benefit a lot from this technology while becoming new crypto users.

Apart from partnering with other projects to create the tools (dapps) for allowing these population to enter into the space, the Education/Acculturation process is Key if you want long term results.

Considering to do a Pilot project as a way to do research, educate the community and even discover new markets could be a great experiment!

Hi @Mr.Nobody
How we are partners and as I can see we think in the same way.

You are thinking the same way like me, best way to introduce people into crypto is in trough StableCoins, but we need StableCoins backed by a reserve and supported by a blockchain like Celo, otherway people continue getting rugged by projects that makes himself called “Stablecoins” but they aren´t and people just loose their funds.

Other aspect you mentioned is the Informal Commerce and the lack of financial inclusion, Celo could be a great way to people can acces to have their savings in a self custodial wallet, can make swap betwwen loacl currency and cUSD and this way regard his savings from the devaluation of the local currency. Also they can receive some incentives for thei StableCoins funded in Valora (12%APY atm) like their saving in a Savings Account byt much better because banks paid just a 3% APY at most.

And about partnershipos I visualize a lot of usecase throug protocolos like ImpactMarket, EticHub, Unergy, Local Commerces like HashHouse, maybe some Saving Pool in GodGhosting, ReSource, maybe a solution of loans with GoldFinch and this way we can combat against the private lenders who extort money and charge sky-high interest like 10%/weekly nad if you dont pay you get ki…

I really dont know how many usecases we could have but I am convinced that is the best way to help people in our country and also facilitate the remmitances from their family in other countries.

Let you an image of “La República” newsletter that shows the Colombian interest for the crypto and for use them to do daily payments. 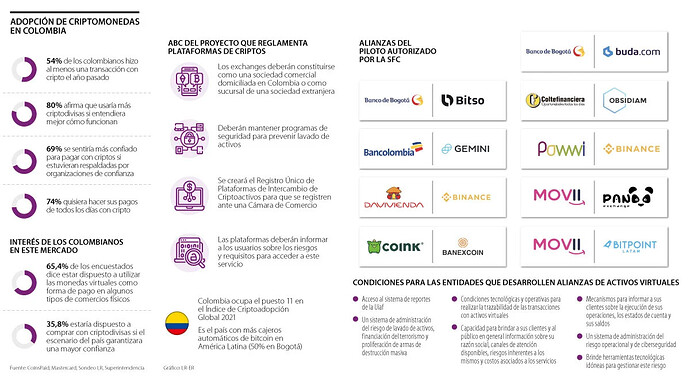 This is super interesting. I wonder if any of these initiatives would be interested*** in*** experimenting with cStables and a possible cCOP.

An added note: This is being discussed by the community on a weekly basis on the Spanish Office Hours. (Tuesdays 11:30am GMT-3).

Would mind sharing what is the “Spanish Office” you’re talking about? And how to access it?